As a school, we deliver a broad, balanced, creative curriculum which reflects our Christian school ethos. We value every child as an individual and we understand that children learn in different ways.

Our curriculum is planned to enable all children to learn.

As a school community, we understand that:

The National Curriculum for Key Stage One in Year 2 and Year 1. The Early Years Foundation Stage Curriculum in Reception, Pre-School and the Nursery classes. The curriculums we follow can be found at;

Please see the individual Year group pages for the curriculum overviews for the year.

Mrs Archer and Mrs Fosbery lead Forest School Sessions for children in Key Stage One. Mrs Fosbery works with the EYFS team to support outdoor learning sessions. The sessions are held on a rolling programme in blocks and take place in the small wooded area and field within the school grounds. On occasions a session may take place behind the school in a public wooded area and also at Mr Campbell's field.

The activities support the main curriculum (particularly literacy, science, maths and the arts) and have a strong emphasis on raising all children’s self-esteem and independence.

An integral part of Forest School is that children will experience the outdoors in all weathers. With the exception of very high winds and thunder storms, please assume that your child will be outside when they take part in Forest School, even if it is for a shortened session.

To help achieve this, we ask you to ensure that your child is sent to school with weather appropriate clothing and footwear to change into. We recommend that the children wear long trousers to minimise stings and scratches but please bear in mind your child is likely to get dirty! We reserve the right to exclude anyone who we feel is inappropriately dressed.

The PTFA raised funds to provide the school with waterproof coats and trousers for children to wear during the Forest School sessions.

If you have any questions about Forest School Mrs Archer will be very happy to chat with you.

At Forest School all participants are viewed as:

As a school we believe it is important that all children engage in regular exercise. This is not only benefits their physical development but also supports their mental wellbeing.

We are fortunate to employ Sports Stars to deliver our PE sessions in the main school.

Coach Ben and Coach Katie from Sports Stars are an integral part of the school staff. They deliver high quality PE lessons in a fun and engaging way for children of all abilities. The also organise a range of opportunities for the children to compete against other local schools.

Year 2 will have the opportunity to swim at the pool at St. Catherine's School in the summer term, these sessions are led by Mrs Nina Deal and staff from St. Catherine's and supervised by school staff.

Religious Education in Church Schools is a subject of excellence through which we can express our distinctive Christian ethos. It allows a deep spiritual engagement with others which leads to greater understanding of the Christian Values which underpin the curriculum.

Bramley Infant and Nursery School is a Voluntary Aided School therefore we deliver RE in line with the Guildford Diocesan Guidelines.

The children at Bramley Infant School enjoy their learning in RE and the teachers ensure that the learning experiences are creative, thought-provoking and inspiring. We are proud of the achievements of the children in RE and the school enjoys celebrating their successes through different productions and assemblies.

Below are statements from the Diocese about the guidelines.

The overviews aim to ensure continuity and progression across the Primary phase, and to adequately prepare pupils for the Secondary phase. The new units to some degree mirror the core structure of the Surrey Agreed Syllabus for RE whilst maintaining the distinctively Christian elements. This helps to adequately prepare pupils for their next school and aid the process of transition.

There are 9 compulsory units for all Foundation Stage pupils. These are short units that build on implicit RE experiences.

The three core concepts around which the Foundation Stage units of study are based are central to gaining an understanding of religion in its widest sense. The concepts apply to both human experience, which is the starting point for RE in Foundation Stage, and to the world of religion. It is the recommendation that the learning in RE should start from the child’s own experience (implicit RE) and lead children progressively to the Diocesan units of work, which focus more on Explicit RE.

There are displays throughout the school that celebrate the children’s learning – in addition, there are displays of work from Reception, Year One and Year Two in the main hall to show an aspect of RE to the wider community.

Across the school we develop the theological concepts of Creation, Incarnation, Salvation and Trinity.

Religious Education enables children: To learn about religions by:

to learn from religion by developing the ability to:

Religious Education contributes to children’s spiritual, moral, social and cultural development by helping them to develop:

Through the study of religions, we:

Develop an understanding of the influence of beliefs, values and traditions on individuals, communities, societies and cultures, form the local to the global.

Develop the ability to make reasoned and informed judgements about religious and moral issues, with reference to the teachings of the principal religions represented in the United Kingdom.

Develop positive attitudes of respect towards other people who hold views and beliefs different from their own, and towards living in a society of diverse religions and beliefs.

Use these skills to understand the way people of faith behave and to explore our own spirituality.

Governors and staff appreciate the difference in people’s cultural and religious backgrounds and these are taken into account when planning learning opportunities and choosing resource materials. An awareness of stereotypical gender images or views are also considered. The requirements of children having a special need are also considered.

The National Curriculum and Guildelines for Religious Education 2014

The teaching of Religious Education provides opportunities for:

Whenever and wherever possible, children’s learning is creative and imaginative and includes role play, drama, poetry, art and music. All these approaches are used as stimuli or as a means of enabling children to express their understanding and beliefs. Children are encouraged to answer and ask difficult questions in order to develop their spiritual understanding. Religious Education is not always taught in isolation but linked to topics and other areas of the curriculum. There are two attainment targets in Religious Education and these are reflected in the learning opportunities provided for the children.

All children are included in Religious Education unless their parents have completed a written request for their child to be withdrawn because of conflicting religious beliefs.

The RE leader and Headteacher audit, review and order new resources as required.

Collective Worship focuses on ‘Our Values’ and vision.

Every day the children join together in an act of collect worship. This is a wonderful time to gather together as a school to learn about the values taught to us by Jesus and God. Our themes are based on the school values and vision. The children are all given the opportunity to contribute by choosing stories, making comments, asking or answering questions, retelling the stories or making up prayers. Each half term the value is celebrated and explored in special acts of worship. A member of the governing body joins us and presents an award to a child from each class who has demonstrated the value in a special way.

Open the Book (OTB) is a project which offers primary school children an opportunity to hear the major stories of the Bible. Each week members of the local churches will act out a story from the Lion storyteller Bible based on Christian Values. The children always look forward to Open the Book assemblies every Friday. It is a fun and interactive way to learn about the Bible. It also provides a special and valuable link to our community. The children love spotting the OTB members in the village and at community events.

Our prayer and reflective spaces are an inclusive space to enable children to explore their own spirituality. They are able to use this quiet space to reflect on the themes they have learnt about in their RE lessons or in the collective worship. It is a quiet and respectful area in which children go to pray or write down their thoughts, ideas or big questions. There are activities that children are able to carry out based on Christian or British values.

Each term we carry out a Pause Day. This is a special time where the children come together to work with children from different year groups. These days are invaluable to the children as they enable them to reflect on their learning and engage in deeper religious thinking. Recently our pause days have focused on courageous advocacy, the importance of the festival of Easter and Advent. 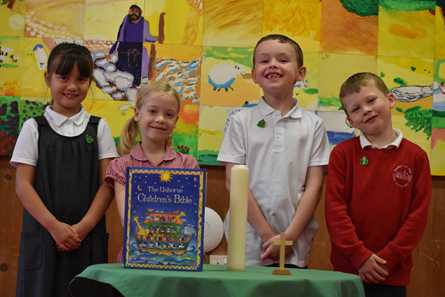